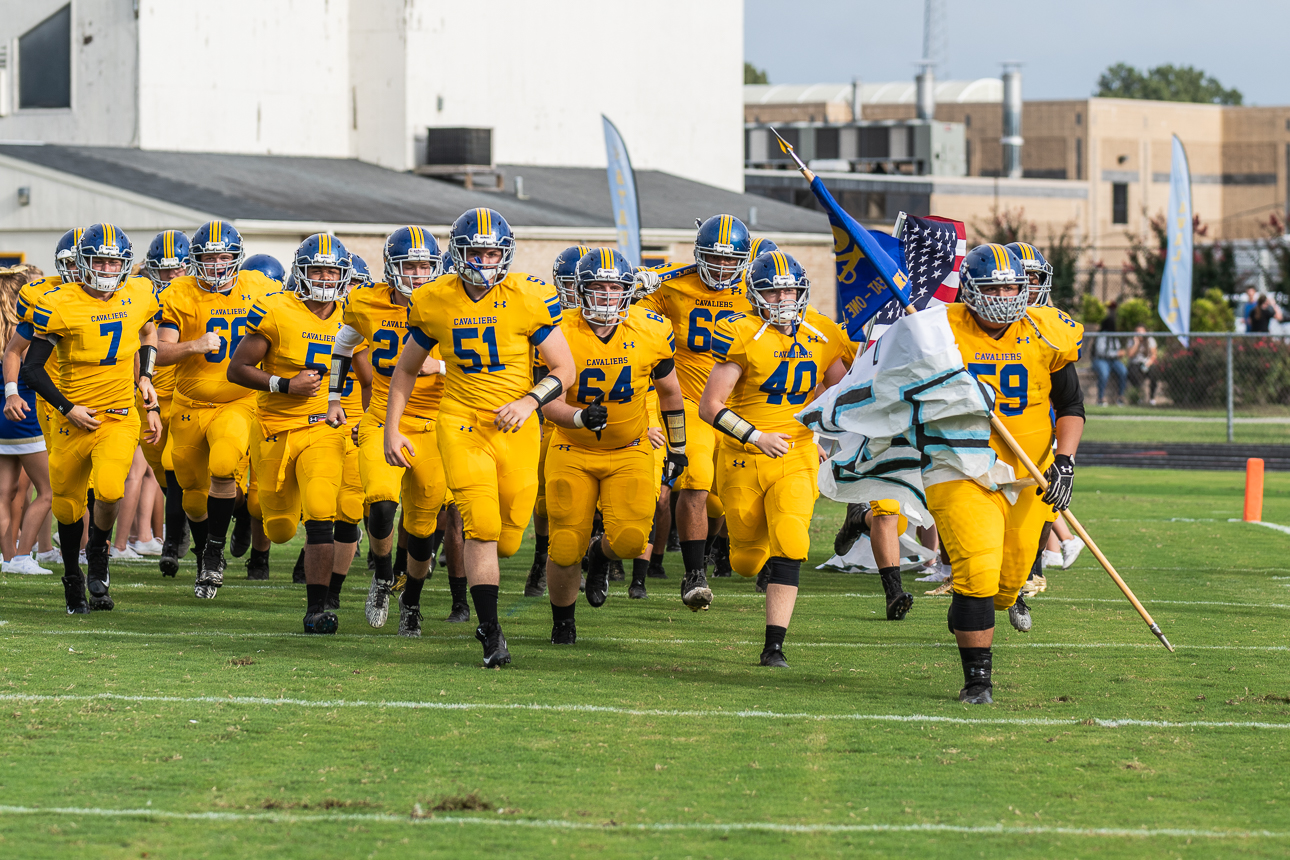 On Friday October 5th the Calvert varsity football team took on the McDonough Rams.  Calvert received the opening kickoff hoping to win their third straight game.  Unfortunately, things started slowly and on the opening drive the Cavalier’s offense stalled out and turned the ball over after a failed 4th down conversion.  However, on the next offensive series senior running back #2 Dre Mackall got things going with a long run of 65 yards and in just two more carries senior #5 TJ Prather capped off the drive with a 7-yard touchdown run.  With the defense back on the field, McDonough’s efforts were crushed because of a quarterback sack by senior #4 Mikka Harvey on 2nd down, which was followed by a huge tackle for a loss by junior #40 Gus Aufderheide.  The ensuing offensive series was led off by junior quarterback #15 Michael Floria who completed his first pass to junior tight end #14 RJ Short for a 15-yard strike.  Calvert took a 13 – 0 lead as full back Augustine Aufderheide ran for one-yard score.  Sophomore kicker #44 Robert Page made it fourteen with his extra point.  After another quick three and out for the Rams, Dre Mackall found the endzone for a 17-yard touchdown.  A spirited Calvert defense lead by the likes of senior defensive end #11 Justin Morsell, senior defensive specialist #10 Corey Watson and junior defensive end #14 RJ Short continued to put tremendous pressure on the Rams offense and once again McDonough was again forced to punt the ball away.  On the very next play Floria threw his first touchdown pass of the night to sophomore #9 wide receiver Jeremiah Holloway.  Jeremiah’s 45-yard reception and another Page kick brought the score to 28-0.  On the next series the Rams would fumble giving Calvert excellent field position.  On the fourth play from scrimmage Floria continued his passing efficiency with his second touchdown pass of the night by converting a 14-yard play action pass to junior tight end #45 Cade Meredith.  The Cavaliers would successfully convert on a two-point conversion giving Calvert a 36-0 at half.

While under a second half running clock McDonough’s offense continued to have their problems handling the Cavaliers stingy defense and after another turnover, Calvert’s senior running back #4 Mikka Harvey would conclude the offensive outpouring on the night with his first touchdown of the season and capping the final score at 43-0. With the win Calvert’s record improved to 4-2 and now fixes their eyes on their county rivals the Patuxent Panthers who will be the featured opposition for Calvert’s 2018 homecoming game. 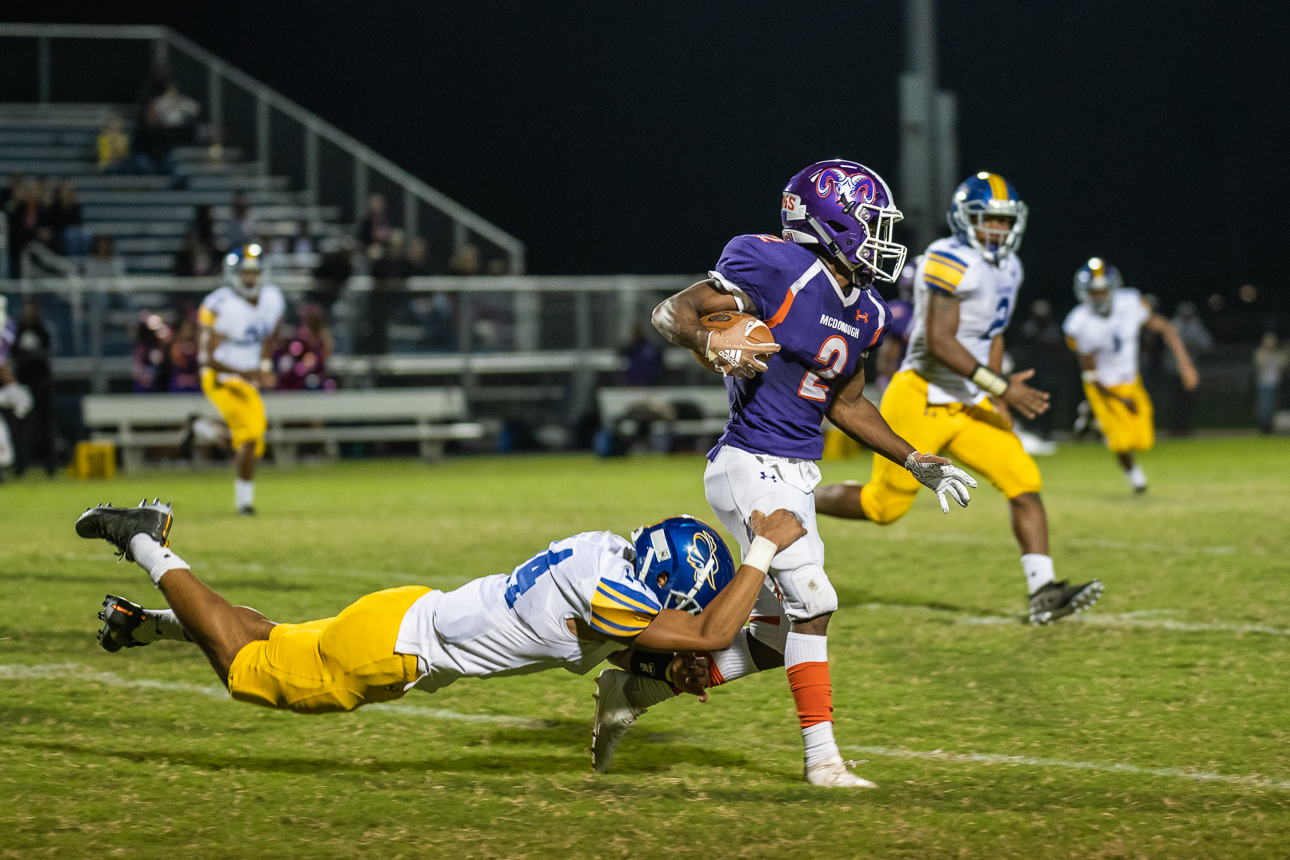 Junior defensive end #14 Rodney (RJ) Short, stretches out to make a tackle for a loss in Calvert’s fourth win in the season.  In week six Calvert win’s 43 to 0 over McDonough.

Through the mid season mark, Calvert has a 4 and 2 record. 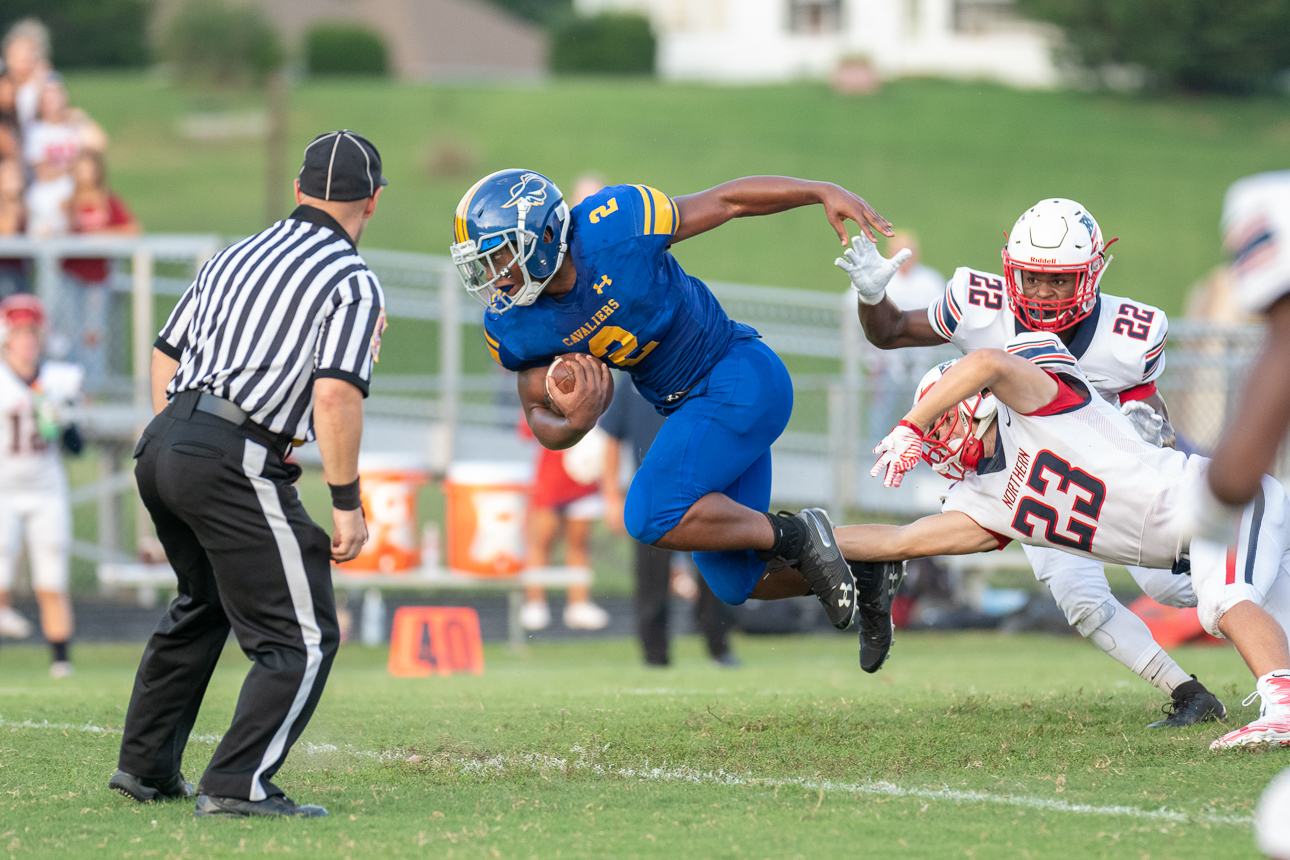 Calvert football loses the opener in tough fashion after being nipped by inclement weather.  Calvert is stricken by lightening and loses to county foe Northern 7 to 6. 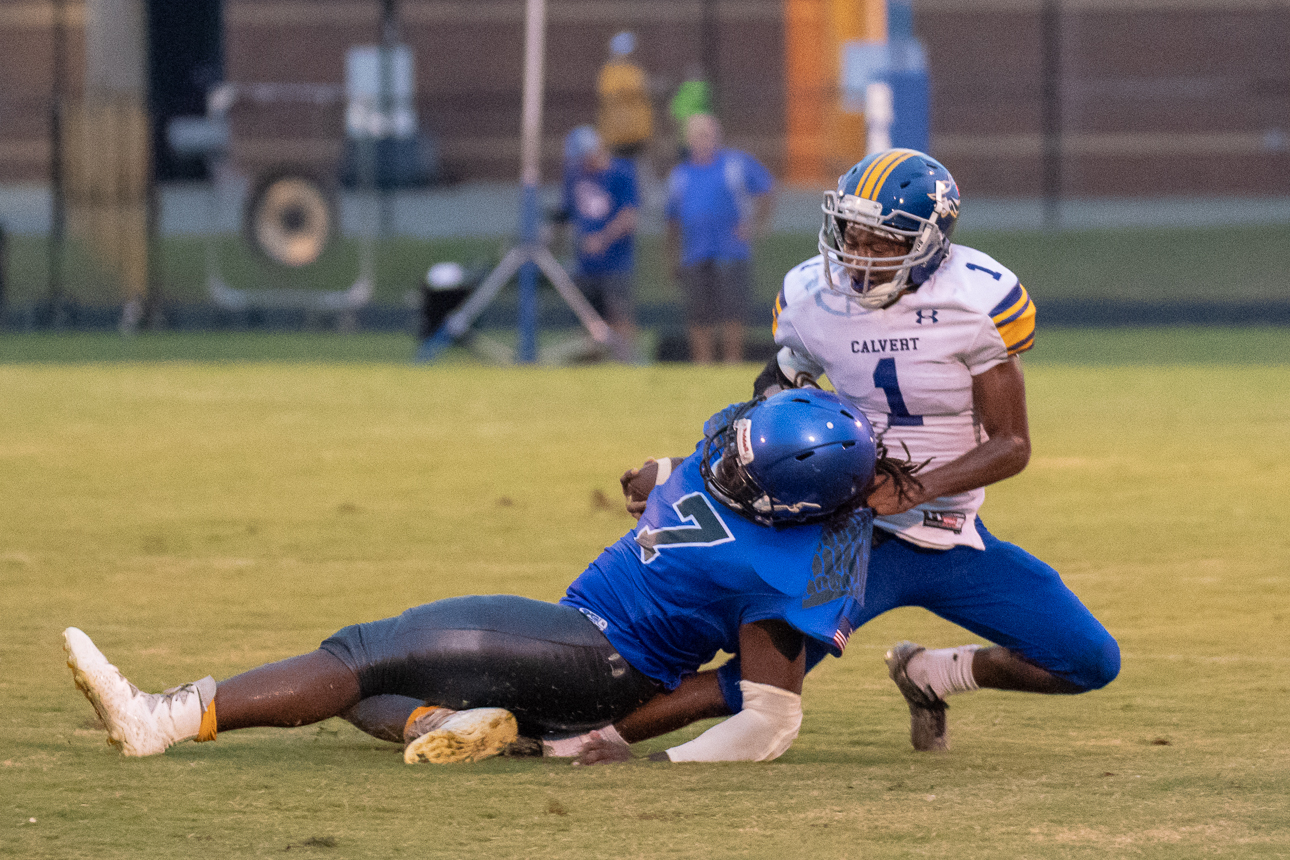 Calvert rebounds in week two with a 28 to 0 victory over Leonardtown in a game that was cut at the half due to lightening in the area.  In just fifteen offensive plays the Cavaliers score three times and the defense scores on a fumble return from 40 yards out.

Calvert loses their second game of the season to Huntingtown 15 to 0.  Week three was Calvert Football’s Gold Rush game in which Calvert raises money for the Touchdowns Against Cancer campaign.  Once again Calvert Football earned All American distinction in its fundraising efforts to outscore pediatric cancer. 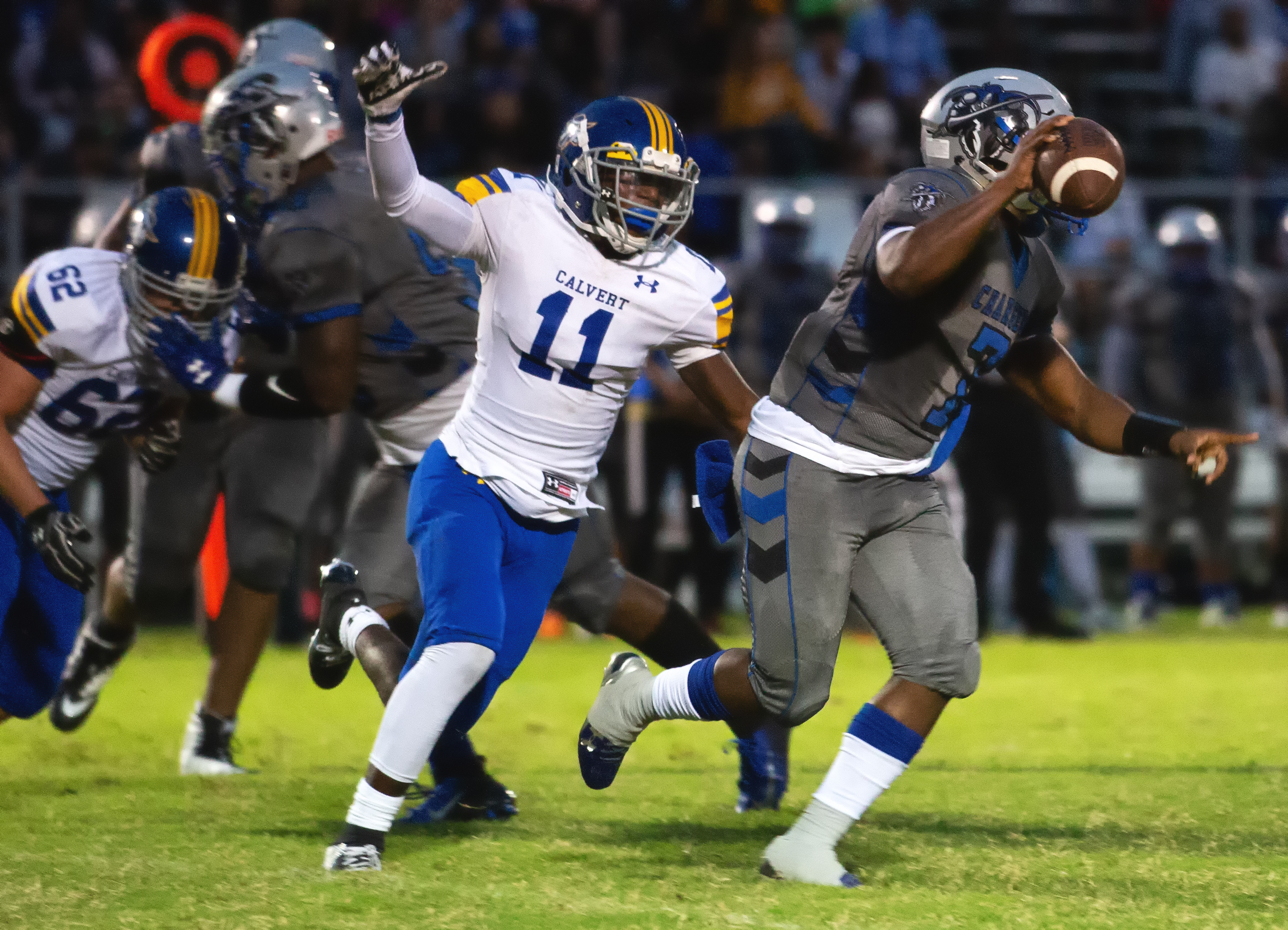 Calvert football responds in week 4 with a decisive victory over Lackey by a score of 27 to 6.  The Cavalier’s defense put together 6 sacks and senior running back #2 Dre Mackall rushes for 3 touchdowns on the evening. 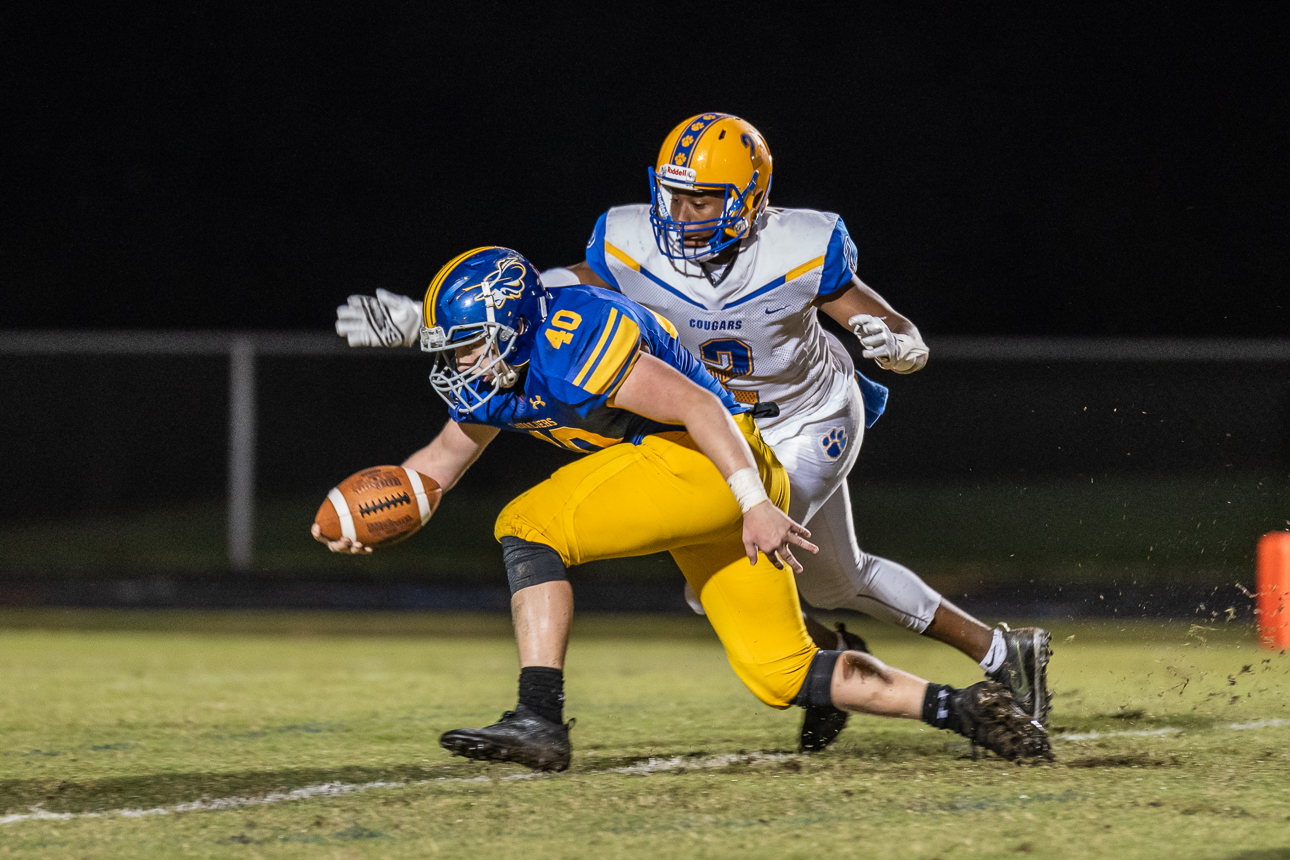 In week 5 Calvert played Thomas Stone and was able to win their 2nd straight by a 48 to 20 margin.  The Calvert offense was able to produce 513 yards through their ground and air attack.  The defense was able to slow down a phenomenal Cougar rushing attack.