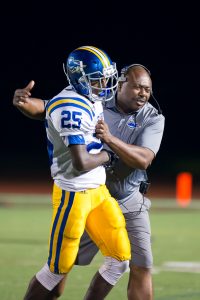 Favorite Quote
: Forget Failure, Forget Mistakes, Forget Everything, Except What You’re Going To Do Now and Do It!

General Background: Coach Johnson is married to a wonderful woman who makes him a much better man. Since the age of 7 yrs old, football  has always been a part of his life either, through either coaching or playing the game. Football has open some doors in his life, were if it had not been for for football, life would be very different.