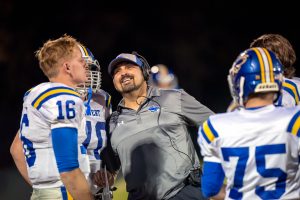 General Background: Coach Sneade is married to an amazing woman, Krysten. He is also a son to a great mother, Benita. He is blessed to have two very supportive sisters, Kim and Karen along with their husbands, Ernie and Mark. Coach Sneade is a proud uncle to two precious nieces, Addy and Avery and four exciting nephews Dakota, Jake and Ben.

Coach Sneade is a man of faith, a servant of God, and a United States Marine.  He understands that his purpose as a teacher and coach is to be used by God to help grow young people into their personal greatness. He believes that people of the world have not yet lived their best day until they know Him and live for Him!

Favorite Quote: “Success is uncommon and not to be enjoyed by the common man. I’m looking for uncommon people because we want to be successful, not average.” – Coach Cal Stoll