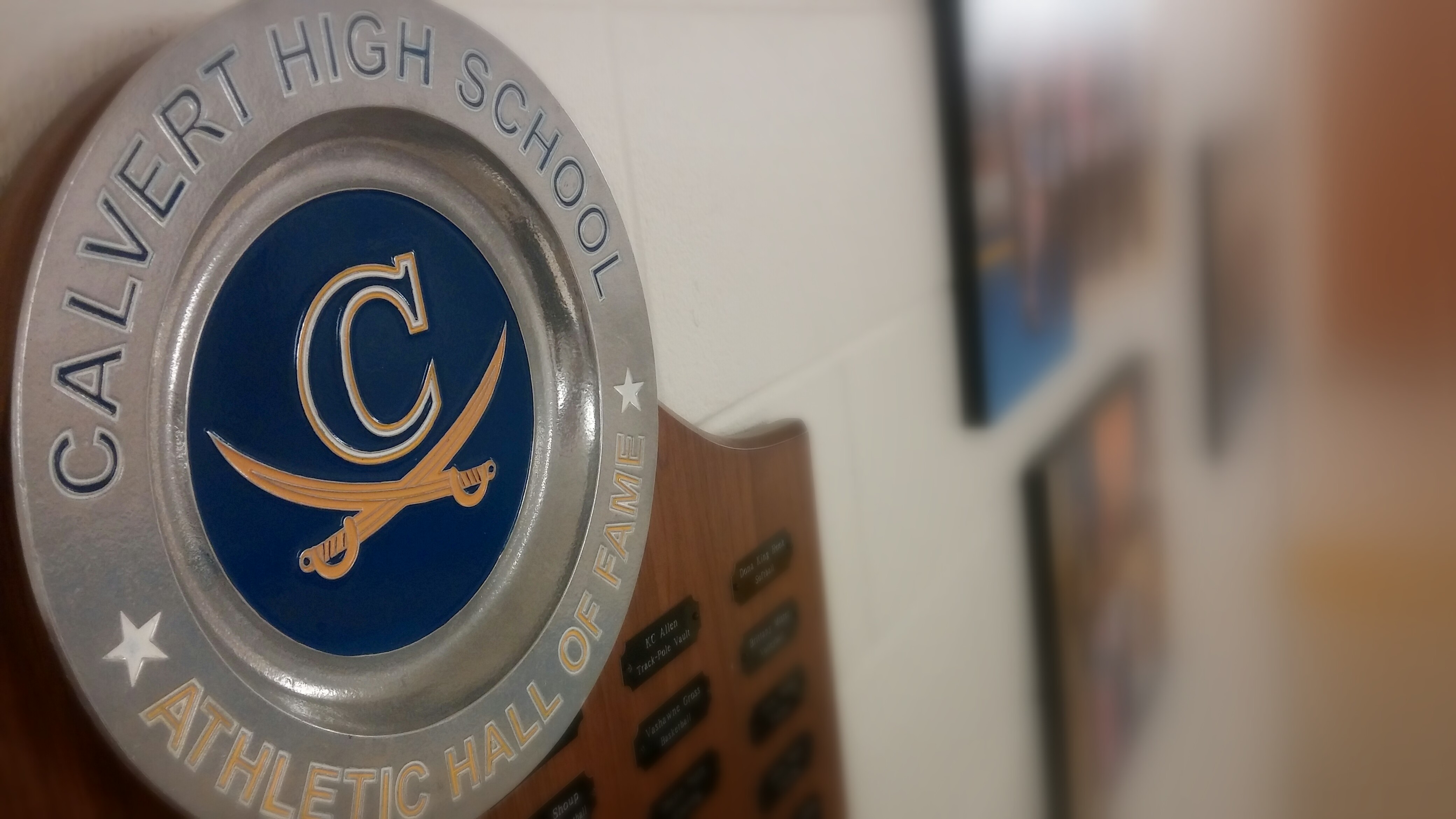 The Calvert High School Athletic Hall of Fame Award recognizes and honors outstanding achievements of athletes, coaches, and others, who have made significant contributions to their athletic programs and been instrumental in promoting the growth of athletics at Calvert High School.

This year’s class included three new inductees for football: Robbie Henning, Donnie Phelps and Jerry Franks. Robbie Henning, who graduated in 2002, played varsity football all four years of his high school career. Through his career, Robbie was a two time All-Conference Selection and a three time All Met All League Player. He was also named All County four times for his athletic abilities. His academic abilities were celebrated with an impressive overall 3.70 GPA. His most prestigious athletic accomplishment at Calvert High, was winning the 2000 Maryland 3A State Championship. Robbie continued his illustrious playing career at Fairmont State University, along with playing a few years of Arena Football.  Currently, Robbie lives and works in Calvert County and is also a member of our Calvert football coaching staff.

Coach Donnie Phelps has been a long time member of the Calvert community!  His efforts have left a huge, lastly impact on so many. Coach Phelps was inducted into the Hall of Fame as a major contributor to our athletic programs during his tenure at Calvert High. This includes coaching football, baseball and softball while teaching physical education. While not coaching in the winter, he was a game manager for wrestling and basketball.  He helped lead Calvert football to the 2000 Maryland 3A State Championship. He also coached alongside head softball coach, Frank Moore, winning state titles in 1997, 1998, 2005 and 2006 respectively. Coach Phelps would credit his greatest accomplishment was in raising his daughter and being a part of her high school athletic career. This comes as no surprise, as he has given for the sake of family and the betterment of others. Today, coach still works in our community as a driving instructor and looks forward to passing his knowledge of athletics down to his grandson.

Coach Jerry Franks had a short, five year history at Calvert High as an administrator. But in those five years, he orchestrated a four year transformation of Calvert’s football program. This has been marked as some of the most successful years in Calvert football history! Coach Franks has coached football for over 48 years and has collected over 240 victories as a head coach. But arguably, his most successful campaign came over the four years while at Calvert High. The team achieved the school’s best records, up to that point, in its 37 year history. He amassed a 37 and 9 record, capping it off with the counties first State Championship in 2000. Over his four year coaching career at Calvert, he was named the All SMAC Coach of the Year, State Coach of the Year, AP Coach of the Year, and All Met Coach of the Year. In 2007, Coach Franks was inducted into the Maryland State Hall of Fame. Currently, he is coaching in St. Mary’s County at St. Mary’s Ryken High School.

Calvert’s Athletic Hall of Fame has a number of coaches and players that have greatly represented the football program.  These enshrinees are listed below:

For the full roster of Hall of Fame inductees visit www.calvertsports.weebly.com.