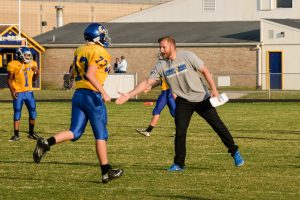 General Background: Coach Turner is the husband to Lauryn Turner, son of Cyndy Turner & Michael Turner, brother to Amanda Blackwell, and uncle to Haley and Mackenzie Blackwell. Chris is also, the Founder of Turner Athletics and resides in Prince Frederick, Md.

Favorite Quote: “I’ve had smarter people around me all my life, but I haven’t run into one yet that can outwork me. And if they can’t outwork you, then smarts aren’t going to do them much good. That’s just the way it is. And if you believe that and live by it, you’d be surprised at how much fun you can have.” -Woody Hayes