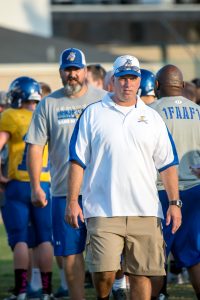 General Information: Coach Payne is supported by his wonderful wife Christina, son Tyler, and daughter Alyssa.  Coach Payne is a former United States Marine, has a degree in Criminal Justice, and is currently working on his Masters in Public Administration.  When he is not directly coaching football, working as a SWAT officer, or spending time with his family, he is often found volunteering in various community activities.