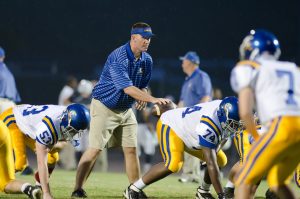 College and Degree: Towson University, Towson MD: Bachelors of Science in Kinesiology (May 2001)

General Information: Coach Marick was born in Howard County and lettered in 3 high-school sports (football, baseball, indoor track).  He then went to Towson to play offensive line.  He coached and taught for a short time in central Florida and during that time he work with 10 ball players who now have careers in the NFL.  Coach now resides in Calvert county with his son William.